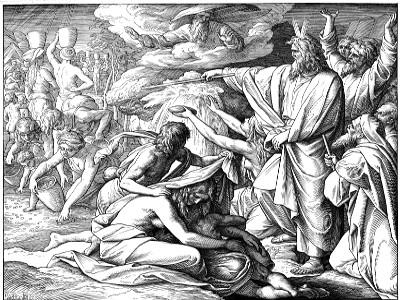 The first verse in Exodus 16 is important for establishing the context of the pericope for the Fourth Sunday in Lent and should not be excluded. Israel set out from Egypt on the fifteen day of the first month (Numbers 33:3) and has now arrived in the wilderness of Sin thirty days later (assuming that each month in the calendar in the days of Moses had thirty days, as Moses himself suggests in the flood lasting for 150 days or 5 months in Genesis 7:11, 8:3-4). They have just left Elim and the waters of Marah and are heading generally southward toward Sinai.

In this short period of time, Israel has not only left behind the plagues of Egypt but also passed through the Red Sea. They cannot have forgotten the wonders of God in so short a period, even if their hardness of heart causes them to ignore them. However, forgetting even the sweetening of the waters of Marah not that many days ago (Exodus 15:25), they begin to grumble for food. Israel begins to wonder whether they will have enough to eat in the wilderness. Who could find enough food for a congregation likely numbering in the millions (Exodus 12:37)? They even begin to imagine they had it better in Egypt, even though they had cried out to the Lord in their distress (Exodus 2:23-25).

The Lord in His providence provides them with bread from heaven. Manna, described as bread in Exodus 16:4, defies exact description. It is described as “fine,” a word used to describe the dust in Isaiah 29:5 which is contrasted with chaff. Its appearance is like “hoarfrost,” the crystalline frost which tends to form on objects like branches. It is said to either “crackle” or be “flaky,” though that particular word in Exodus 16:14 occurs only here in the Old Testament. Manna is also “white” and like “coriander seed,” but that comes from the Greek Septuagint.  “Coriander” is used to translate this word which is also unique to manna in Exodus 16:31 and Numbers 11:7.  Small wonder that manna means “what is it” in Hebrew!

Together with a miraculous abundance of quail, manna is meant as a sign to Israel that it is the Lord who has brought them out of Egypt (Exodus 16:6). They are given sufficient food in a land which could not normally support millions. Each one measured out an omer of the manna, a unique measurement which only occurs in this passage and is explained in Exodus 16:36. This omer would be enough for every person, literally “a man to the mouth of his eating,” that is, as much as one needs (which occurs in Exodus 12:4; 16:16; 16:18). This corresponds to the Lord’s command that the bread be gathered daily, except on the Sabbath. It is the “matter of a day in that day” and finds a clear parallel in the petition “give us this day our daily bread” (Matthew 6:9-13; Luke 11:1-4). God will provide what we need on the day in which we need it. Why then should we worry? (Matthew 6:25-34).

By following these commands regarding gathering outwardly, Israel would also show an inward trust. When they “measured it with an omer” as the Lord commanded day by day, there would be no lack and no surplus, only exactly what is needed. This is why Paul refers to Exodus 16:18 in 2 Corinthians 8:15. The congregations who had much shared with those who had little, and nothing is left over or lacking as a result. This also applies to the multiplication miracles in Matthew 14:13-21; 15:32-39; Mark 6:32-44; 8:1-10; Luke 9:10-17; and John 6:1-13. Jesus multiplies according to the need so that no one is left hungry. God’s providence is perfect.

Yet many do not listen. They go out to gather on the Sabbath anyway, despite the clear prohibition. They do not believe that the Lord will indeed provide for them. They keep it until the morning, because they want an insurance policy that they will have bread tomorrow. Like their descendants in Jesus’ day, they seek God not because of signs, but because they ate bread (John 6:26). They have no faith.

As a final note, Aaron is commanded to keep a jar of manna as a testimony for future generations of what the Lord has done (Exodus 16:32-34). It would call to mind what God had done as a way of reassuring what God would continue to do for His people. Hebrews 9:1-5 notes that this golden urn was placed within the ark together with Aaron’s staff and the tablets. It was certainly a holy object, since it rested within the ark of the testimony. But 1 Kings 8:9 and 2 Chronicles 5:10 state that both this urn and the staff were gone by the time the ark reached the temple. It is not clear where they went, perhaps being lost through the negligence of the priests or during the captivity of the ark in 1 Samuel 4-6. However, the Lord willed for this to happen, for much like the bronze snake in 2 Kings 18:4, physical reminders always carry with them a temptation in the hearts of sinful men toward idolatry. 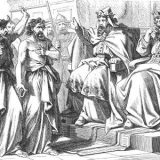 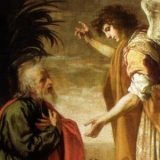