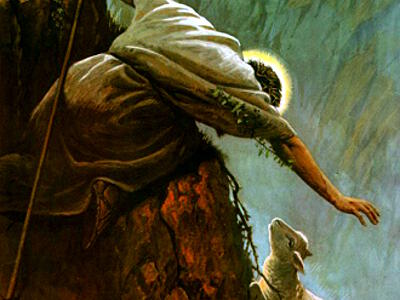 Jerusalem had just fallen.  Yet the Lord commands Ezekiel to still rebuke those who had contributed to its downfall.  It was a pride which misapplied what God had actually said and turned His grace into a false security.  The people left for a time in the land said things like “Abraham was only one man, yet he got possession of the land; but we are many; the land is surely given us to possess” (Ezekiel 33:24).  But how can one be a son of Abraham and yet not do the works which he did (John 8:39)?

Among those who led Israel astray were the false shepherds, the teachers of Israel.  They had been neglecting their calling, and they were feeding themselves (Ezekiel 34:2 ff.).  It is tempting to identify this sin of the shepherds with openly false teachings, which practically repeat the ancient question of Satan, “Did God actually say” (Genesis 3:1).  But while this is certainly included, false prophets are often far more alluring because they are far more subtle.  They take what God has indeed said and misapply it.  “Hear this, you heads of the house of Jacob and rulers of the house of Israel, who detest justice and make crooked all that is straight, who build Zion with blood and Jerusalem with iniquity. Its heads give judgment for a bribe; its priests teach for a price; its prophets practice divination for money; yet they lean on the Lord and say, ‘Is not the Lord in the midst of us? No disaster shall come upon us’” (Micah 3:9-11).  “Precisely because they have misled my people, saying, ‘Peace,’ when there is no peace, and because, when the people build a wall, these prophets smear it with whitewash” (Ezekiel 13:10).  And perhaps the most to the point:  “Do not trust in these deceptive words: ‘This is the temple of the Lord, the temple of the Lord, the temple of the Lord’” (Jeremiah 7:4).  The false shepherds distorted the promises and the grace of the Lord and turned them into a false security.  Surely they, the very sons of Abraham, would not be taken away from the inheritance!  (Consider also Jeremiah 5:12; 14:13-16; 23:17.)

The Lord mentions that He will do all of these things which He promised “on a day of clouds and thick darkness” (Ezekiel 34:12).  This phrase occurs in several other passages.  In Deuteronomy 4:11, it is used to describe the glory of the Lord as it appeared on Mount Sinai.  Joel 2:2 and Zephaniah 1:15 both use the phrase to describe the Day of the Lord.  Job 38:9 does not use the phrase exactly, but uses both nouns in parallel to describe the sea.  Perhaps the most helpful, however, is Psalm 97:2, where the expression is used to directly describe the glory and majesty of the Lord.  Taken together, therefore, the phrase seems to describe the glory which the Lord shows forth when He acts just as He has said.  On the day when the Lord gathers His sheep like a shepherd, His glory will be clearly seen, because He will glorify His name (John 12:28).  The Lord makes this clearer in Ezekiel 36:22 and following, when He says that “it is not for your sake, O house of Israel, that I am about to act, but for the sake of my holy name.”

As a final note, it is worth noting that using “shepherd” to describe the teachers of Israel happens in the days of the prophets.  Scripture first uses “shepherd” to describe someone who shepherds people of King David (2 Samuel 5:2; 2 Samuel 7:7; 1 Chronicles 11:2; 17:6; Psalm 78:70-71).  To call Jesus the Good Shepherd thus seems to recall also that He is the Son of David.  Of course, the New Testament also, together with passages like Ezekiel 34, calls ministers “shepherds” (which is identical with the Latin word “pastor”) in 1 Peter 5 and in passing in Ephesians 4:11.  But to call those whom Christ has sent to speak on His behalf shepherds or pastors is always in a derivative sense, for there is only one Shepherd (John 10:16). 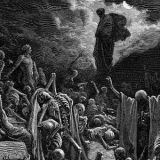 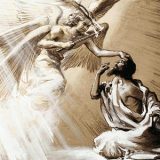 The Holiness of the Lord
Scroll to top