The book of Proverbs can be rather difficult to outline.  Most of the book is composed of fairly unrelated or loosely related proverbs.  Solomon is the author of most of these proverbs (Proverbs 1:1; 10:1; 25:1), though not all of his sayings were recorded (Compare 1 Kings 4:32).  However, there are other authors noted in the book, such as “the wise” (Proverbs 24:23), Agur, son of Jakeh (Proverbs 30:1), and King Lemuel (Proverbs 31:1).  The heading in Proverbs 25:1 notes that the “men of Hezekiah, king of Judah” compiled the book.  Therefore, Solomon is the primary author, to be sure, but the book itself appeared in the form we have it near the time of the exile.

However, the book does fall into a larger pattern.  Proverbs 1:1-9:18 is essentially a lengthy discourse on the value of Wisdom, especially in contrast to Folly, both of which are personified in several places as women.  Proverbs 10-29 contain the content of wisdom, and almost all of these sayings (with the exception of Proverbs 24:23-34) belong to Solomon.  Proverbs 30-31 are two additional groups of sayings attached to the end.

The reading for the Second Sunday after Trinity, which is Proverbs 9:1-10, therefore falls within this initial discourse of the value of Wisdom.  The contrast with the woman Folly is important here.  Wisdom builds her house and is diligent in her work.  Folly relies on her seductive powers while knowing nothing (Proverbs 9:13).  Wisdom sends her handmaidens to call from the highest places and bids the simple to leave his foolishness behind, going on the difficult but rewarding way of insight.  Folly herself either seduces a passerby or goes to the high places, but she bids the simple to go the easy path of stealing her so-called “wisdom,” the path of idleness, sin, and finally death (Proverbs 9:14-18).

Note also the comparison between the wise and the foolish in the middle of this chapter.  The fool, here called a scoffer, resists instruction and hates those who attempt to teach him (Proverbs 9:7-9).  The wise man, however, gladly receives instruction so that he may be wiser still (Proverbs 9:8-9).

But this is not a generic call to wisdom, as if it were enough to be “wise” in some vague sense.  Rather, the key verse of this passage, and arguably of all of Proverbs (and Ecclesiastes for that matter) is:  “The fear of the LORD is the beginning of wisdom, and the knowledge of the Holy One is insight” (Proverbs 9:1).  The one who fears the Lord is wise, and the one who does not fear God is a fool.  This has nothing to do with education or book-learning, as one might say.  It is not even so much to do with practical wisdom, street-smarts.  Rather, everything on earth which is undertaken or attempted apart from the Lord is folly and will ultimately come to nothing.  Build a name for yourself:  the grave will take it away.  Build a house with your own hands:  time or disaster will turn it to dust.  Seek pleasure or work hard:  all will finally come to an end.  But the fear of the Lord is wisdom, because the things of the Lord will never pass away.  Though heaven and earth will pass away, the Word of the Lord will never pass away (Matthew 24:35; Revelation 14:7; Isaiah 40:6-8; Luke 10:41-42).

It should also be noted here that the fear of the Lord is not a term of intense respect, but a genuine fear.  God is almighty and all-holy.  He is our Creator, and we are His creatures and will always remain so.  That sort of power should cause us to tremble.  There is a difference from this fear which gives God glory and the fear which only cowers.  This is why passages like Exodus 20:18-21 are so instructive in this regard.  The people cower, which is why Moses instructs them to “not fear,” but he also notes that God has come down on Sinai to teach them so that “the fear of Him may be before you, so that you may not sin.”  Cowering before God only seeks to avoid the blow, but fearing the living God is turning away from that which He hates.  Fear God, then, and give Him glory, because to turn away from evil is to walk the path of life (see also passage likes Matthew 10:28; Revelation 19:5; Genesis 22:12; Exodus 1:17-21; Ecclesiastes 12:13). 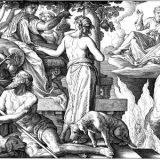 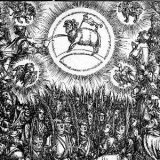