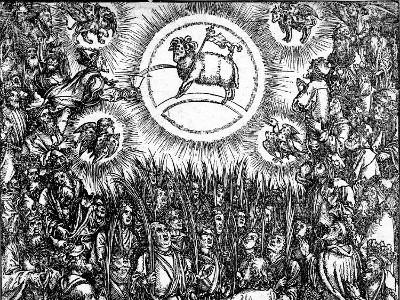 The gospel reading for the Second Sunday after Trinity, like the previous Sunday, concerns itself with the blessings of faith.  This faith comes by hearing the word of Christ, represented here as the invitation of the Lord of the Feast.

Jesus tells this parable in the context of a feast where he is eating with the Pharisees. Luke 14:1-24 chronicles this feast in which Jesus heals a man with dropsy and uses the concept of the feast as the context to teach about the kingdom of God.

Jesus says that “a man” gave a great banquet.  We are to understand throughout the parable that this man indicates the Triune God, who gives the great eschatological feast at the end of time with all the saints. This man extended the invitation to many, but they excused themselves from the feast though they likely had according to ancient custom, accepted the invitation long before and had promised to come. This indicates the Israel of the old covenant, the ancient people of God. Like the brothers in last week’s parable, they had the opportunity to hear Moses and the prophets, the gracious invitation to God’s feast. Abraham and all the Old Testament saints partook of the feast by faith, by grabbing hold of the promises which God made to them through the word. Though the excuses offered in the parable for not heeding the invitation concern godly things like marriage and vocation, those invited uphold them as more important and more pressing that the word and promises of God.

Upon this rejection, the Lord of the Feast commands his servant to go into the streets and lanes of the city, that is, to the people of God once again. Indeed, God sent John the Baptizer among the Jews to prepare the way of the Lord. Jesus is born among the Jews as a Jew, teaches in their synagogues and in the Temple. Gods’ people are called to the fulfillment of the Old Testament faith in Jesus.

The Master of the feast also commands his slave to go outside the city to the highways and hedges, that is, to the Gentiles, and compel them to come in to the banquet.  This will be an inclusive feast as foretold in the prophets.  Jew and Gentile, clean and unclean partake of the feast by the gracious invitation of the Lord of the feast. The feast and banquet hall must be full.

In Jesus’ ministry he came firstly to the Jews as was right, for salvation is of the Jews. The parable indicates that many though invited will reject the Feast of God, salvation and grace.  Yet God’s purposes are not thwarted and his banquet hall will be full.  The Gentiles will be invited and compelled to come into the feast just as those of old were compelled, through the word preached and taught.  This parable discredits any notion of dispensationalism (the salvation of Jews for the sake of their bloodline or their keeping of the Mosaic Law) for old and new covenant Christians (yes, they were Christians in the Old Testament!) are included in the feast of mercy, grace, and forgiveness not by works of the law, but by faith in Jesus Christ. This feast will come in its fullness when Jesus comes to judge the living and the dead and the new creation is ushered in. Yet this feast is available to all even now as a foretaste, through the promises God makes in his word and sacraments. 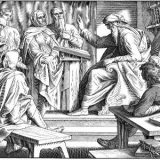 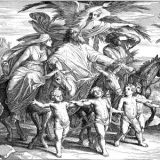