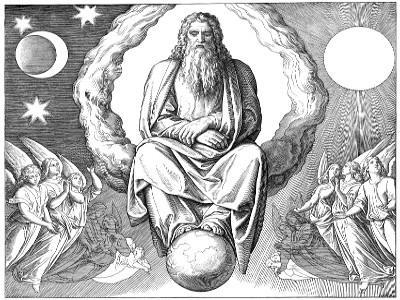 I have talked earlier about Isaiah 6 at some length in the article “The Holiness of the Lord,” and I would encourage readers to read or re-read that article in conjunction with this lectionary study.  Briefly, Isaiah 6 speaks of the Lord’s utter uniqueness or holiness, from which even the sinless seraphim must avert their eyes.  But because all of Scripture is an inexhaustible mine, I will add additional notes here.

Isaiah 6 forms what is commonly referred to as Isaiah’s call.  This vision of the Lord is not Isaiah’s earliest, as his ministry has already begun in the days of Hezekiah (2 Kings 19).  Nevertheless, the clear language of Isaiah 6:8 justifies this title.  The Lord appears to Isaiah and sends him to the house of Israel to proclaim His Word (see the parallel calls of Jeremiah 1 and Ezekiel 2).

The reference to Uzziah, or Hezekiah, in Isaiah 6:1 places this passage shortly after the fall of the northern kingdom of Israel.  His father Ahaz (or Amaziah) reigned in Judah when the last king of Israel, Hoshea, was set upon the throne (2 Kings 17:1).  However, by the end of Hoshea’s brief reign of nine years, Hezekiah had ascended to the throne of his father (2 Kings 18:1).  Even though Uzziah’s reign in Judah is long (compare 2 Chronicles 26:3 and 2 Kings 18:2, noting that the two authors have different starting points for counting), it still places Isaiah 6 within decades of the fall of the northern kingdom.

Regarding the passage itself, the Holy Spirit reveals through it several important truths about the Lord.  Holiness has already been mentioned elsewhere, as noted.  Closely connected to His holiness is the glory of the Lord.  Even though the “train [or hem] of His robe” is all that can be seen in Isaiah 6:1, it is enough to make the ground shake (Psalm 18:7; 77:18) and the house to fill with smoke (Exodus 19:18; 1 Kings 18:10-11; Revelation 15:8).

In addition to this revelation of the Lord’s holiness and glory, this passage also points to the Lord’s mercy and sovereignty.  The Lord is merciful, because Isaiah should have been destroyed at even this veiled appearance of the Lord.  “Man shall not see me and live” (Exodus 33:20).  Yet the Lord does not reveal the fullness of His glory and covers over the sin of Isaiah, so that he is able to stand in His presence.

The Lord is sovereign, because His question “whom shall I send” reveals His will.  It should not be interpreted as a question of uncertainty, as if the Lord does not already have in mind what He will do.  He is not deliberating.  A statement in the form of a question frequently occurs in the Bible (see, for example, Revelation 7:13-14).  Rather, the Lord appears to Isaiah precisely so that His will is carried out with respect to the remaining kingdom.

Being the Old Testament reading appointed for Trinity Sunday, a few concluding notes regarding this central revelation are in order.  First, the doctrine of the Trinity proceeds from good and necessary consequences of various statements in the Bible.  The word itself appears nowhere in Scripture and is really only the best we have, even if the word itself can lend itself to misunderstandings.  But we should not imagine that it is not a clear teaching of the Bible for that reason, nor should we assume that verses like Isaiah 6:3 do not need to be unpacked.  The Holy Spirit fully reveals that God is the Most Holy Trinity, even if we have to take some steps to make this clear to us.

Second, regarding Isaiah 6:3 in light of the previous note, the threefold repetition of “holy, holy, holy” in itself is not a decisive “proof.”  Repetition may be only for emphasis also in the Bible, such as Jeremiah 7:4, Numbers 6:24-26, or the very common tendency of the Psalms to restate ideas in succession.  The threefold holy here also expresses the utter holiness of God, holy in a way in which we will never be.  Nevertheless, it is true that there is a hint of the doctrine of the Trinity here, but hints need to be clarified with far clearer passages. 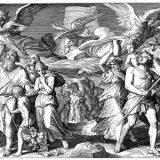 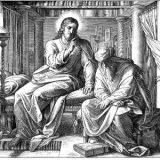