Of the bookshelves in my study, one entire shelf bears titles like “Planting Missional Churches” and “Church Planting for the 21st Century.” These books come from a wide variety of Christian confessions. “Church planting” has become a term as ecumenical as “stewardship” or “pastoral care.” Each of the books on that shelf means by “church planting” the establishment of a new Christian congregation where there was none before. No doubt, those books may recommend that the church planter should be bivocational or that he should seek out hundreds of thousands of dollars in funding before he begins. One book may insist that public worship services begin almost immediately; another may contradict that advice flatly and require that at least 200 people be on hand for the first public service. Yet each of those books presumes in common with all the others that there is such a thing as a “church planter” who establishes new churches, an activity obviously biblical called “church planting.”

It is surprising, to say the least, to read the Bible and not to find the phrase “church planting” in it. Is this like how the phrases “Holy Trinity” or “communication of attributes” also don’t appear in the Scriptures? Not really. “Trinity” unites the biblical data on the Father, the Son, and the Spirit in a single word expressing the essential divine reality for which we have no other single word. “Communication of attributes” expresses elegantly the relationship between the human and divine natures of the God-man for which we can cite all manner of passages. New congregations are established in Scripture. There is no question that Christian assemblies for worship and common life in Christ sprang up in Jerusalem, Antioch, Rome, and so many other locations named in the New Testament. But does the Bible speak of “planting” churches?

It does not. It speaks rather about “planting” in a variety of other ways. Jesus speaks of the Pharisees in their obstinate opposition to him as “every plant that my Father in heaven has not planted” (Mt. 15:13) and the sowing of the wheat as “plants that came up” (Mt. 13:26) alongside the Enemy’s sowing of weeds. Here the action is God’s, and the means identified in Mt. 13 is the “word of the kingdom” (Mt. 13:18). In the parable of the tenants (Mt. 21, Mk. 12, Lk. 13) the master of the vineyard plants a vineyard that belongs to Him alone. Paul, the great missionary of the post-Pentecost church, says three times in 1 Cor. 3 that he has planted (3:6, 7, 8), as he has spoken of feeding the Corinthians with milk (3:2) and of himself and Apollos as “servants through whom you believed” (3:5). The object of that planting and Apollos’ watering and God’s gift of growth is explicitly the Corinthian people themselves, “You are God’s field, God’s building” (3:12). Paul’s aim has not been to establish an institution but to call men to faith by preaching Christ crucified.

What’s the difference? This is the difference between thinking of our evangelistic task as people-centered or institution-centered. The Bible speaks about gathering people, cultivating people, God’s field as people, God’s building as people, the temple of God composed of people. Paul plants not a church but the “word of the kingdom.” The sower in Mt. 13 plants not a well-funded institution but the same word that the man sows with good seed later in the same chapter. The focus is constantly on the spread of the word and the cultivation of the Lord’s vineyard, the Lord’s field, the Lord’s building which are the believers who receive that word and bear abundant fruit. Our task is not planting organizations. The organizations with their budgets and boards will arise to manage what has been given, as you can see the church’s forms of life develop in the Acts of the Apostles. Our task is rather planting the word of the kingdom in the field of this world so that the wheat, the good seed, the abundant fruit of the Lord may grow and flourish in His vineyard. 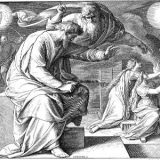