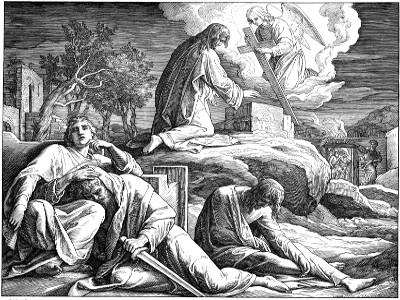 Prayer takes many different forms. For simplicity’s sake, I will begin with secret prayer.

Secret, simply put, means praying alone. Jesus speaks about it directly: “And when you pray, you must not be like the hypocrites. For they love to stand and pray in the synagogues and at the street corners, that they may be seen by others. Truly, I say to you, they have received their reward. But when you pray, go into your room and shut the door and pray to your Father who is in secret. And your Father who sees in secret will reward you” (Matthew 6:5-6). Would you have your reward of men or of God? Prayer done for the purpose of being seen is not prayer at all.

Secret prayer takes place in a couple of ways. One may either pray at set times on a regular schedule or throughout the day. Both have their place in Biblical piety. Both should be done, and neither should be neglected. If we want to “pray without ceasing,” then we should not fear to pray at every possible moment. However, only praying at random runs the great risk of never praying at all. We will always find excuses to put off the things of God because of sin. Choosing a set schedule should be a matter of personal devotion. No law may be made about times. What matters is keeping the schedule. Time can always be found if you look for it. It is simply a matter of priorities.

Prayer throughout the day obviously occurs wherever one might be at the time, but there is a great benefit in choosing a physical location for prayer at set times. Setting apart a particular place can aid in devotion, because it prepares the mind and the soul for the task at hand. One may choose to decorate such a space with devotional reminders, especially Biblical verses, for the same purpose. A kneeler or a kneeling pad can also be appropriate in such a space if desired. Caution is needed, however, so that one is not distracted by such décor. There is much to be said for simplicity.

The posture of prayer is also not confined. The key with such posture is to aid focus and devotion. Kneeling with hands folded is a posture often associated with prayer, and therefore may be useful. Sitting or standing does not negate prayer, however, nor does praying with unfolded hands. It is also immaterial whether one’s hands are intertwined or palms together. None of them is a mark of orthodoxy or of faith, and one must beware of making any of them a means of being seen by men.

Do not feel a need to rush through prayer. If one is rushing, it is probably being treated as a chore, which calls for a prayer for repentance. Taking one’s time in prayer can be as simple as allowing for silence before, during, and after prayer. We should be mindful and attentive during prayer and not wandering off in our thoughts, our words, or our actions.

Prayer should be formed by and flow out of the Word. Therefore, it is highly appropriate, especially during set times, to incorporate some portion of Scripture. The Psalms are especially suitable for this purpose, since they are Biblical prayers. If you follow a schedule of reading smaller sections of Scripture regularly, they can be easily incorporated into set prayer times.

Devtional aids, such as prayer books, can be beneficial. Written prayers are not necessarily less sincere, since as will be shown below, being led in prayer is also a kind of prayer. Written prayers do run a great risk of being done mindlessly, however, and should be used thoughtfully. Extemporaneous prayers, also sometimes called ex corde prayers, meaning “from the heart,” are also good, especially since praying at all times often calls for prayers made up on the spot. They can be just as mindless, though, especially if they lapse into repetitiveness. Some things, however, are not beneficial. Beads, for example, encourage mindlessness in prayer, since they are meant to be used as a way of “keeping count” while the mind “meditates” on something else.

As for the content of prayer, there is nothing which is “too little” for God. “Ask, and it will be given to you; seek, and you will find; knock, and it will be opened to you. For everyone who asks receives, and the one who seeks finds, and to the one who knocks it will be opened” (Matthew 7:7-8). It may be that we ask for the wrong things, asking for a serpent instead of a fish. As James says, “You ask and do not receive, because you ask wrongly, to spend it on your passions” (James 4:3). We so often put so many parameters and qualifications on how we desire it to be answered that it may seem like He never answers us the way we want. However, God does answer prayer, and He desires that we bring everything to Him, because in prayer we recognize our need for God in all things. “Rejoice in the Lord always; again I will say, rejoice. Let your reasonableness be known to everyone. The Lord is at hand; do not be anxious about anything, but in everything by prayer and supplication with thanksgiving let your requests be made known to God” (Philippians 4:4-6).

If you find yourself at a loss for what to pray, make that a part of your prayers. The Holy Spirit Himself prays with us and guides His Church also in her prayers. Directly invoke the Holy Spirit as an initial prayer, perhaps saying something like “Come, Almighty God, the Holy Spirit, and teach me to pray.” He will not fail to answer such a prayer, just as Jesus taught His disciples to pray when they asked Him (Luke 11:1).

One may also lead or be led in prayer. Such should also be done reverently, following the same ideas which guide secret prayer. One must strive harder to avoid a Gentile desire of approval when not praying alone, of course, but we are Christ’s body, the Church. Husbands and fathers are called to lead such prayer in the family, since as Paul says in 1 Corinthians 11:3-4: “The head of every man is Christ, the head of a wife is her husband, and the head of Christ is God. Every man who prays or prophesies with his head covered dishonors his head.” But in the case of public prayer, the pastor leads the prayer of the Church as a whole. Following another in prayer is not demeaning, but it should not be used as an occasion for mindlessness. 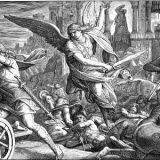 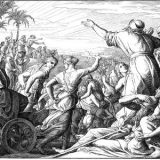