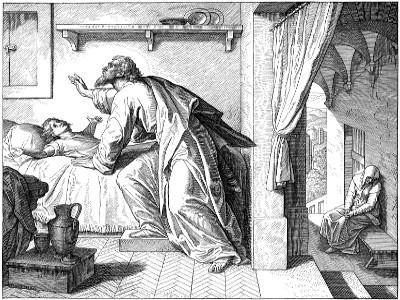 While the promise of resurrection appears throughout the Bible, within the Old Testament there seem to be only three recorded resurrections:  the widow of Zarephath’s son (1 Kings 17:17-24), the Shunammite’s son (2 Kings 4:18-37), and the man whose body touched the bones of Elisha (2 Kings 13:21).  Old Testament resurrections are therefore confined to the prophetic ministries of Elijah and Elisha.  Given that Jesus declares that John the Baptist is the promised Elijah (Malachi 4:5-6; Matthew 17:11-13), His own miracles of resurrection prove His indirect claim to be Elisha, the One greater than John and having a double portion of the Spirit.  Prophecy and resurrection are closely connected.

The first of these three readings is the selection for the Sixteenth Sunday after Trinity.  It is the second half of the account which begins in 1 Kings 17:8 and an important part of the wider section of 1 Kings 17-18.  Elijah declares to the wicked king Ahab that there will be no rain “except by my word” (1 Kings 17:1).  Through this miraculous drought, Elijah seeks to declare to Ahab that there is not God except the God of Israel.  This is why he will confront Ahab in 1 Kings 18 in a powerful demonstration of the burning altar against the prophets of Baal.  “The Lord, He is God; the Lord, He is God” (1 Kings 18:39)!  Only after this confrontation will the drought come to an end at the word of Elijah in 1 Kings 18:41.

During the time of the drought, the Lord provides for Elijah, first in a miraculous way with the ravens (1 Kings 17:3-6), but then in a more ordinary way with the widow.  This passage is helpful for speaking about what might be called ordinary and extraordinary Providence.  The ravens are a prime example of God’s extraordinary Providence:  He is not bound to our means of providing the things we need in this life.  He may indeed choose to have birds carry bread to His prophet.  But even if we have to bake the bread we eat, it is no less the gift of God, for all things flow from His hand.  He simply chooses, in His ordinary Providence, to use men as the means for providing the things we need.

The Lord commands Elijah to go northward along the coast of the sea to the village called Zarephath (1 Kings 17:9).  Zarephath was deep within Canaanite territory (Obadiah 20).  While it is possible that this widow could be partly an Israelite (as Hiram was the son of an intermarriage in 1 Kings 7:13-14), it is more likely she is a Canaanite, which explains the offense of Jesus’ words to the Jews in Luke 4:25-26.  Being a Canaanite, she is part of the cursed race of Ham (Genesis 9:25) whose continued existence was a mark of Israel’s unfaithfulness (Judges 1:27-36).

Yet even with the ordinary means of Providence, God provides a multiplication miracle as well with the jar of flour and the jug of oil.  Through the Word which Elijah proclaims to her, which the miracle is meant to confirm, the widow and her household, though Canaanites, believe in the Lord.  She has ceased to be a part of the condemned body of Canaan and has now by faith been connected to the body which will be delivered in the day of judgment.  How ironic that Ahab, a son of Abraham, stands under judgment while this woman, a daughter of Canaan, stands before the Lord!

But the woman’s son dies.  She believes it to be a judgment upon her sins (1 Kings 17:18).  While the wages of sin is death (Romans 6:23), there is every reason to believe that her son dies so that God may show His power through him.  The man born blind (John 9:1-3) and Lazarus (John 11:14-15) serve God’s purposes in their affliction.  God declared to Moses:  “Who has made man’s mouth? Who makes him mute, or deaf, or seeing, or blind? Is it not I, the Lord” (Exodus 4:11)?  Even in affliction and death, the Lord brings those who belong to Him closer to Himself.

Elijah’s method is somewhat unusual, since he stretches himself over the child three times (1 Kings 17:21-22).  One should perhaps not read too much into this, since the prophets frequently do unusual things.  What is interesting, however, is that Elijah calls upon the Lord in conjunction with this act.  Elisha, on the other hand, having a double portion of the Spirit, does not speak a word at all (2 Kings 4:34-35).  Christ Himself raises with His mere command, and He vindicates His claim as the Prophet through His own resurrection.  We have, therefore, an increasing proof of the truth of the Word of God:  Elijah called upon God who answered faithfully; Elisha proves his office of prophet by raising others even merely by the touch of his bones; and Christ through His own resurrection is “vindicated by the Spirit” (1 Timothy 3:16).  We do not believe the Scriptures because of Christ’s resurrection.  The resurrection itself is proof that God’s Word cannot be broken.  As the widow herself says:  “Now I know that you are a man of God, and that the word of the Lord in your mouth is truth” (1 Kings 17:24). 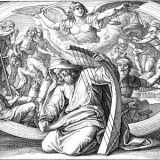 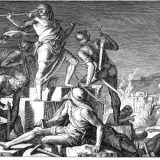 Nehemiah and the Reformation
Scroll to top