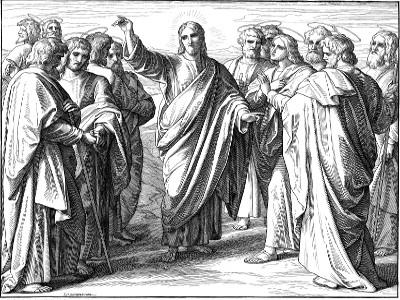 Ephesus, like so many of the newly formed congregations in the days of the apostles, struggled with the question of how the Gentiles and Jews, now both Christians, related to one another.  Peter himself received a vision before going to Cornelius that confirmed to him the will of God.  Seeing the Holy Spirit descend on the Gentiles, how could those  who heard his report say anything else other than “Then to the Gentiles also God has granted repentance that leads to life” (Acts 11:18)?  But though God had clearly revealed his will, old rivalries still remained.

Paul addresses this question by pointing to the Gospel of Christ.  The Lord “predestined us for adoption to Himself as sons through Jesus Christ” (Ephesians 1:5).  Being sons, He also chose us from the foundation of the world to be holy in His sight, not divided according to the fruits of sin, but as one in Christ.  He poured out the Holy Spirit as a “guarantee of our inheritance until we acquire possession of it” (Ephesians 1:14), so that we await the fullness of our redemption.  However, we are no longer divided in the way of the world, but alive and united in Christ.  “For we are his workmanship, created in Christ Jesus for good works, which God prepared beforehand, that we should walk in them” (Ephesians 2:10).  Predestination, therefore, is as much about being chosen to believe as it is being chosen to be holy in His sight.

Paul points to his ministry as a proof of all of this.  He is a steward of God’s grace to the Gentiles, that through Christ all who believe have access to the Father.  Jew and Gentile are no longer two, but one in Christ, so that the new man is neither Jew nor Gentile, but Christian.  Yet Paul did not know this “mystery of Christ” except through revelation, much like Peter.  This mystery “was not made known to the sons of men in other generations as it has now been revealed to his holy apostles and prophets by the Spirit” (Ephesians 3:5), a clear testimony that the Lord moves progressively throughout the history of salvation, to His glory.  “For truly, I say to you, many prophets and righteous people longed to see what you see, and did not see it, and to hear what you hear, and did not hear it” (Matthew 13:17).

His ministry, therefore, is not a matter of right, but of grace.  Only through the “working of His power” could Paul, or any man whom the Lord chooses to be a minister, proclaim this great mystery.  “Therefore, having this ministry by the mercy of God, we do not lose heart” (2 Corinthians 4:1).  Paul regarded himself as the “very least of all the saints” since he had once persecuted the Church (1 Corinthians 15:9), yet the ministry of the Lord is not a matter of right, but of grace.  No man deserves to proclaim the Gospel.  Paul’s sin does not make him uniquely qualified or anything similar, as if greater sins made for greater preachers.  Paul’s sin magnifies his own inadequacy to make the grace of God all the clearer.

All of this “was according to the eternal purpose that He has realized in Christ Jesus our Lord” (Ephesians 3:11).  God chose Paul from before the foundation of the world, not only to believe and to be holy in His sight, but also to be one who “turns many to righteousness” (Daniel 12:3).  If faith is through God’s mercy, and the ministry is a matter of mercy, then, as Paul says, those who fulfill this ministry do so according to the will of God (2 Timothy 4:5).  Pastors therefore may be encouraged, knowing the Lord’s will for their lives.

That God places men into the ministry through His own will is not an opportunity for laziness.  The call to preach the Word in season and out of season is not a call to pride.  Such proud and lazy men are “enemies of the cross of Christ,” who “do not serve our Lord Christ, but their own appetites” (Philippians 3:18-19; Romans 16:18).  It also follows that occupying the office of the ministry is no proof that it is the Lord’s will.  “The scribes and the Pharisees sit on Moses’ seat, so do and observe whatever they tell you, but not the works they do” (Matthew 23:2-3).  “But false prophets also arose among the people, just as there will be false teachers among you, who will secretly bring in destructive heresies, even denying the Master who bought them, bringing upon themselves swift destruction. And many will follow their sensuality, and because of them the way of truth will be blasphemed. And in their greed they will exploit you with false words. Their condemnation from long ago is not idle, and their destruction is not asleep” (2 Peter 2:1-3).  False prophets and false teachers, though they have all the outward appearance of the office of the ministry, are waterless clouds, swept along by winds (Jude 12-13).  You shall know them by their fruits!

But for the one whom the Lord has chosen and placed into the ministry by grace, Paul calls for him to struggle mightily for the sake of God.  The ministry is not a matter of words, but of power, the transformative power of the Holy Spirit which raises from death to life and sin to holiness.  “Remind them of these things, and charge them before God not to quarrel about words, which does no good, but only ruins the hearers. Do your best to present yourself to God as one approved, a worker who has no need to be ashamed, rightly handling the word of truth” (2 Timothy 2:14-15). 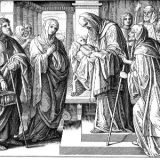 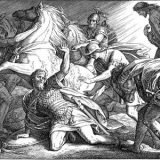