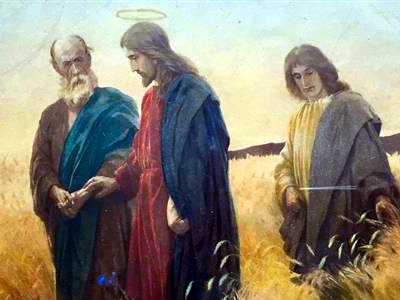 The language of “walking” resonates throughout the whole Bible.  Enoch is the first said to “walk with God” (Genesis 5:21-24), and he was taken up into heaven because of his faith (Hebrews 11:5-6).  Noah also walked with God, being blameless in his generation (Genesis 6:9).  Abram, before receiving the name of the promise, hears God’s command to “walk before me, and be blameless” (Genesis 17:1).  What further connects these passages together is the tense of the verb:  all of them share the same unusual Hebrew tense found in Genesis 3:8.  In other words, they are walking in the same way that God walks.

This concept also occurs in other passages of the Old Testament.  Proverbs 4 gives an excellent example of the “two ways” found so often in the Wisdom literature.  Men must walk one of two ways, either the way of wisdom, in which is life and salvation, or the way of evil, which ends only in death.  Psalm 1 states that the righteous man does not “walk in the counsel of the wicked.”  Jesus also describes Himself as “the way, the truth, and the life” (John 14:6), further cementing the language of walking with God.

Paul’s admonition, therefore, to “walk by the Spirit” sets before us these two ways.  Being a Christian is not a static thing, but a movement in conjunction with the Spirit.  Even the word Torah, often translated as “law” in the Old Testament, carries a moving, directional connotation, since it shares the same root as words meaning “to shoot.”  If we are walking in step with the Spirit, then we are not walking down the way of the flesh.  It has to be one or the other.  The Christian cannot stand still.

Because the tree is known by its fruit (Matthew 7:15-20), the righteous and the wicked are distinguished by their actions.  Nor is this hidden, because Paul says that “the works of the flesh are evident” (Galatians 5:19).  Christians cannot engage in such destructive actions and expect to escape unscathed.  Paul’s list is extensive and straightforward.  “Sensuality” refers to a lack of self-control.  “Sorcery” is more literally “using drugs,” since the original word is related to English words like “pharmacy.”  Within the context, Paul cannot mean that all drugs or material cures are forbidden, since the Bible refers positively to physicians in many places.  Rather, like Asa who sought the help of doctors in his distress instead of seeking the Lord (2 Chronicles 16:12), it is an attempt to gain control through physical means of what properly belongs to God.  This is why the word is translated more broadly to include magic, since it is quite possible to trust in God’s gift of healing more than God Himself.  Finally, “orgies” are not exclusively sexual in the way that we often use that word today, but can refer to any kind of unbridled partying, including excessive feasting and drinking.

Is it possible that a Christian may fall into such activities from time to time due to the weakness of his flesh?  Of course it is possible.  Paul laments this weakness in Romans 7.  Yet weakness is not an excuse for such things.  They will exclude one who does them from entering the kingdom of God (Galatians 5:21).  They are deadly poison, not indifferent matters.  Walking in the Spirit means fighting against such things.  Claiming that one couldn’t avoid doing it or even reveling in such things as if they glorified God’s mercy runs the serious risk of becoming hardened in them.  Sin repeated is sin strengthened.  Christians, flee from the works of the flesh!

But on the other hand, the fruits of the Spirit are equally evident.  These are not generic virtues, as if “love” in the abstract is a fruit of the Spirit.  Rather, these are Christian virtues because they come from God and God alone.  Christian love, for example, is not permissive, but transformative.  It builds up the whole rather than accepting things as they are.  Christian joy is not merely feeling happy, but joy in Christ, knowing that this present evil age is coming to an end and that Christ has redeemed us from the depths of our sin.  Christian peace is the peace which surpasses all understanding (Philippians 4:7; John 14:27), knowing that Christ is with us always.  And the list could go on.  But Paul’s point is clear:  “those who belong to Christ Jesus have crucified the flesh with its passions and desires.”  The fruits of the Spirit flow forth from walking in the Spirit, which puts to death the old way and no longer walks down it.  Death breaks forth into life, because we are in Christ. 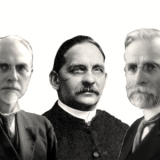 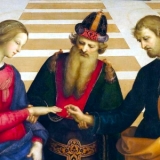 Walther on Marriage
Scroll to top