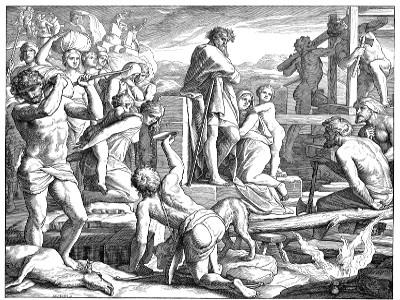 After being sent away from the presence of the Lord, Cain built a city and named it after his son Enoch in Genesis 4. This city should not be confused for our own understanding of a city: a relatively open place where many people live. Rather, the city of Enoch was likely more of a fortress, designed to protect Cain from those who sought his life in revenge for Abel. Cain also sought to stay put instead of wandering, somewhat contrary to the Lord’s judgment upon him. The fortress-city of Enoch was built in the land of Nod, that is, the land of wandering, away from the presence of the Lord.

Just as Genesis 5 will outline the line from Adam to Noah in ten generations, Genesis 4 outlines the line of Cain to the children of Lamech in seven. Lamech’s boast in Genesis 4:23-24 shows the fruit of that line in unbridled evil. Instead of heeding the Lord’s mercy toward Cain as an opportunity for repentance, Cain’s descendants have used it as a pretext for further wickedness. Shall we also presume on the Lord’s mercy?

At any rate, the sons of Lamech also discover and employ certain kinds of technology. Jubal invents a number of musical instruments, and Tubal-Cain begins to forge metals. Both of these technologies can and will be put to a godly use (such as the building of the tabernacle). Yet it is noteworthy that they find their origin in the cursed line of Cain. Having lost sight of heaven, they have instead set their sights on the world.

One could interpret this as a sign of God’s free mercies. Has He not, after all, used the pagans to produce much that is good in this world? Does He not make His sun to rise and send His rain on the just and on the unjust? I think it is equally likely, however, that this is a slight indictment. Cain built a wall for an evil purpose. Having lost his trust in the Lord through his sins, Cain resorts instead to a worldly solution and employs the technology of a wall to that end. What is a wall compared to the living God? Likewise, Jubal and Tubal-Cain undoubtedly employed these things for evil ends, all in the service of idolatry. Instead of relying on God, they have begun to rely on the works of their own hands.

As noted above, these inventions will be used for godly ends, per the Lord’s commands. Yet there is a substantial difference in employing technology when commanded to do so by God and doing so in the place of God. The former is heeding the voice of the Lord and following after Him in all that He says. The latter is trusting in the works of our hands to save us from perceived problems and ascribing to them, consciously or not, the aspects of divinity. 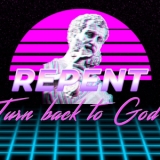 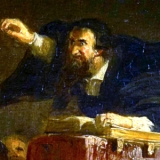 Loehe the Preacher
Scroll to top