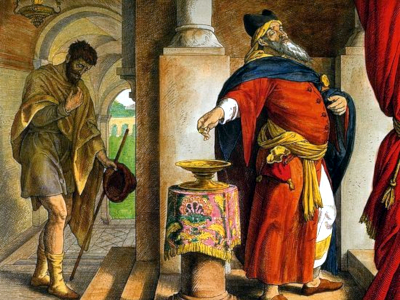 In the Gospel reading for Trinity 11, Luke 18:9-14, Jesus presents a contrast between a typical Pharisee and a tax collector. The former prays in a style that emphasizes how he does more than the Law requires, since neither regular fasting nor giving tithes on things which have been purchased are commanded (tithes are given on things produced, something which the seller would have already paid, so the Pharisee is essentially claiming to pay twice). The tax collector, however, prays a simple prayer with a simple petition: God, have mercy on me, a sinner!

The verb translated as “have mercy” can also be rendered as “be propitious.” Propitiation is an old word borrowed from Latin. In its most basic sense, it means changing divine attitudes about the one making the petition. Pagans naturally understood this as man’s work. A right sacrifice, a fulfilled vow, and the god would no longer be angry, propitiation having been made. But this is not an acceptable understanding of Biblical propitiation, as we see here in Luke 18.

The clue to understanding it comes from the word itself. It is closely related to the Greek word used to describe the mercy seat of the Ark in Exodus 25. This golden lid, flanked by cherubim and sitting atop the ark which held the testimonies of God’s acts like the tablets of the Law, is God’s seat. Exodus 25:22 says that God will meet Israel from above that seat and speak. This is the point of encounter with God.

Leviticus 16 describes the day of Atonement, and one of the specific acts of that day included sprinkling blood over the mercy seat (Leviticus 16:15). Since God had promised to be there, especially on that day, blood covers over the sin of Israel and restores them back into God’s holy presence. This, then, is Biblical propitiation, not pagan works, but redemption through blood.

As Hebrews 10:4 also makes clear, animal blood is not sufficient to bring about a true propitiation of God. It is Christ, bearing His own blood into the heavenly places, that brings about the true propitiation of God toward men. Man could not do it, since he was unfit to be in God’s presence. The sinless Son as both priest and sacrifice brought about this true change in God’s attitude, so that salvation comes from God and God alone.

Thus, the prayer of the tax collector for mercy is appropriate. God, be propitious to me, not by my own works, but by Your own! Amen. 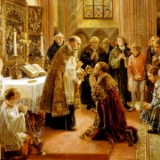 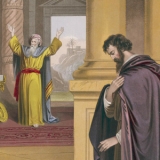